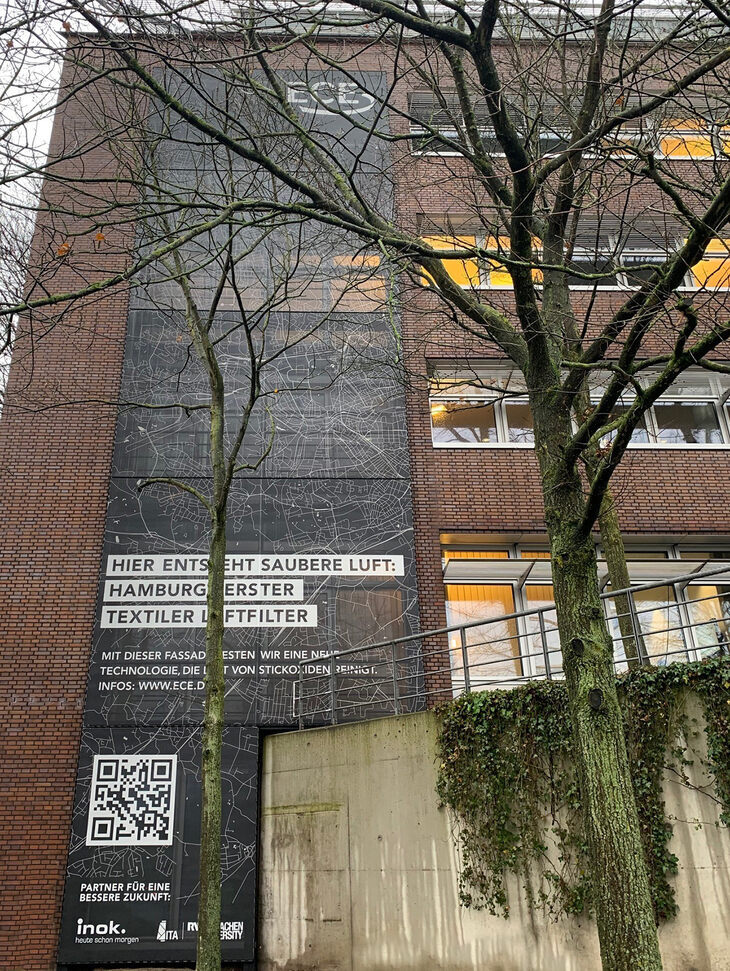 On 5 February 2020, the Senator of Finance of Hamburg, Dr Andreas Dressel, inaugurated the first anti-NOX textile facade on an office building of the company ECE Europa Bau- und Projektmanagement GmbH in Hamburg, Germany. The innovative facade system is a light and transparent textile facade developed by the RWTH Aachen University in cooperation with the companies ECE, Hamburg, and INOK GmbH, Willich, Germany.

The researchers achieved the reduction of harmful nitrogen oxides (NO and NO2) by means of an innovative facade coating. The coating acts as a catalyst and binds the harmful nitrogen oxides from the city air directly to the facade surface under UV light. Oxidation processes convert the pollutants into small quantities of harmless salts.

When it rains, rainfall removes the salt residues from the facade surface. The rainwater is then returned to the cycle of nature. It can seep away or be used as fertilizer for plants. In the project, samples of the rainwater are taken in order to scientifically prove the environmental compatibility.

In addition to the contribution to health protection made by air purification, the facade does even more. As a second building envelope, it lends the building a novel, futuristic appearance and also serves as an external sun protection. Studies have already proven that the new building envelope can reduce the solar cooling load of buildings in summer by up to 78 percent.

Facade system can also be retrofitted and is 100 percent recyclable

The facade system can be used for new buildings as well as for the subsequent energy-efficient renovation of existing buildings, thus contributing to climate protection. The new materials are 100 percent recyclable. In addition, the research team has just presented a variant in which the textile is made from recycled plastic bottles. The researchers are also working on integrating micro solar cells into the textile.

In the future, the facade is to be made available to ITA as a research laboratory in the field of sustainable building technology and contribute to testing prototypes under real conditions.

About the research project at RWTH Aachen University

The project is accompanied by the Institut für Textiltechnik Aachen of RWTH Aachen University, short ITA, and is part of a research project of architect Jan Serode, ITA, which started in 2016 and is carried out in close cooperation with industrial partners and various RWTH research institutes. An elaborate measurement procedure with digital measurement technology on the facade enables live monitoring. The study results should provide information about the contribution of the facade to improving air quality. The effects on urban space as well as on the interior of the building are measured.

"Without the great cooperation and financial support of our partners ECE and INOK, we would not have been able to carry out the project in this way", says architect Jan Serode, ITA. "A very special thanks also goes to the company Hillebrandt Stahl- und Behälterbau GmbH from Greven, Germany, which has helped us a lot in the last twelve months to realise the facade. The company Schüco International KG, Bielefeld, Germany, with its practical experience in the field of facade technology was also helpful to us."