You Are Here: Award winning ceremony of the first DNFI Award to ITA and Fraunhofer-Institute LBF 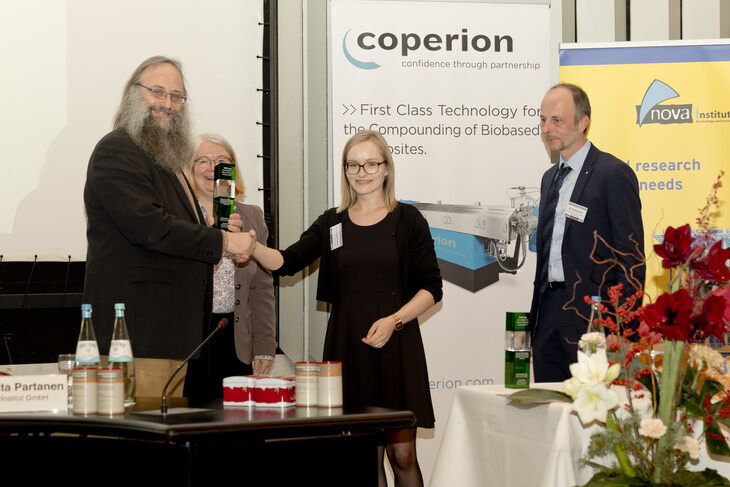 They won the prize for their project "Reduction of moisture absorption of natural fibres and production of untwisted yarns in structural components".

In their project, Marie-Isabel Popzyk and Dr Roland Klein demonstrated that up to 100 % biobased, natural fibre reinforced plastics (NFRP) with low moisture absorption can be developed and used for structural components. Natural fibres such as bast fibres are becoming increasingly important in technical applications such as composites. Natural fibres are inexpensive, environmentally friendly and are characterised by low density and high mechanical properties. Compared to the production of glass-fibre reinforced plastics (GRP), the use of NFK reduces CO2 emissions by about 30 % and energy consumption by about 40 %.

Terry Townsend, Chairman of the DNFI, stated that the research of Popzyk and Klein characterises the dynamics of natural fibre technology. From high-performance clothing fabrics to innovative biocomposites, natural fibres provide solutions to the challenges of the 21st century.

The two winners were selected among participants from more than 100 countries in an online process. The voting for the DNFI Innovation Award began in July 2017, when a subcommittee of DNFI members selected five finalists from the list of many excellent nominations. In August and September, worldwide voting took place. Further information on the conference can be found at http://biocompositescc.com .